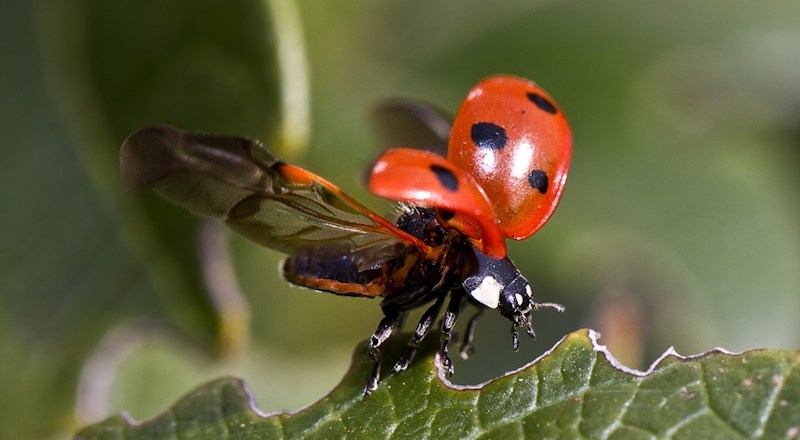 We have all experienced the horrors of pests infesting our garden, from slugs and snails devouring hostas and lupins, aphids such as blackfly and greenfly smothering our roses, scale insects on hydrangeas, and grubs like chafers and leatherjackets infesting our lawns.

These pests can cause massive amounts of damage even killing plants as these feed their insatiable appetites and after over twenty years of changes in the law many of the synthetic chemicals we have used to control these pests are no longer available and those that remain whilst still the most effective way of dealing with a pest problem no longer have the broad spectrum of uses they once used too. There has also been a surge of interest in using more natural methods to protect our gardens as some people no longer wish to use synthetic chemicals due to concerns about the environment especially when dealing with fruit and veg.

It is worth mentioning that all these products are safe when used as directed - you should always read the instructions before use, if they were not safe to use, we would not be allowed to sell them and they would be banned.

The good news is that there are a range of products which under the right conditions will control your pests without the need to spray using traditional pesticides - biological controls!

Biological controls use nature to fight nature and the first recorded use was by the Chinese in about 304AD with the western world starting to use them in the 1870s. There are many ways to use biological controls.

Importation is where the predators of non native pests are also bought in to control them as the predators already present will not do the job. An exciting example of this is the work being done to isolate a beetle from Japan that only eats Japanese knotweed and nothing else, when this beetle species is found it can be imported and unleashed on the dreaded knotweed to combat the spread of this most invasive of weeds, let hope they finish this research soon.

Augmentation is where native predators are bred and then released in greater numbers into specific areas to combat pests at the best times.

Conservation is where habitat is provided to nurture predators throughout the year giving them somewhere to live and over-winter so that they will always be present in the area to provide protection.

All pests have predators - slugs and snails are eaten by hedgehogs while aphids are eaten by the larval and adult forms of Ladybirds and hoverflies. By making your garden a haven for these garden helpers you will benefit from their presence especially as hedgehogs are in serious decline. In the case of predatory insects you can by both adults and larvae which will be sent to you by post for release into your garden so they can get straight to work. To encourage hedgehogs make sure that they have access to your garden by leaving gaps under fences and a pile of leaves in a quiet corner for them to sleep in, bug hotels are widely available and don't forget your bat and bird boxes to attract our flying friends in too.

Then there are the nematodes - microscopic worms that prey on slugs and snails, chafer grubs and leatherjackets. Nematodes hunt down these pests and burrow into them the devour them from the inside as they reproduce. They are available as packs of eggs which you water onto the affected areas and leave them to go to work, once they have cleared the area they will move on in search of more prey so repeat applications are recommended as they will not stay in your garden once there are no pests for them to prey on.

All pests also have parasites which are mainly wasps and flies who lay their eggs on the prey which then hatch out and devour the prey from the inside before transforming into a winged adult and flying off to mate and repeat the cycle. These are mainly for use in greenhouses and are usually only for use by commercial growers and not for the general public, most of the greenhouse produce you buy is protected in this way.

There are many fungal viral and bacterial pathogens which when sprayed on plants will protect them from the pests who ingest them when they attack the plant causing them to become ill and die. At the moment there are none available for the public as they are only approved for commercial use but many producers are looking into getting these approved for the retail market so watch out for these in the future.

This is mainly used to protect and benefit your vegetables by planting other plants around them. It has many other advantages such as providing decoy plants which attract the pests to them instead of your valuable crops sacrificing the decoys instead. Planting green manure which you dig into fertilizer the soil, as well as growing beans and other legumes which absorb Nitrogen from the atmosphere and add it to the soil will improve your soil. Beneficial insects such as bees will be attracted to help with pollination. Tall plants provide shelter such as peas and sweetcorn which will benefit crops such as coriander lettuce and spinach.

However there are some plants that you should not plant together:-
So if you want to grow greener and organically look at biological controls to help your garden grow.
Newsletter Signup